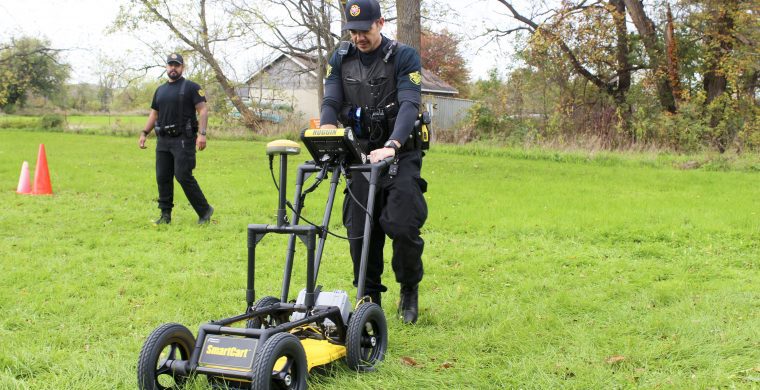 SIX NATIONS OF THE GRAND RIVER-Alfred Johnson knows children are buried at the former Mohawk Institute Residential School and has faith they’ll be found.

“They never had any funerals up there, so we never knew what happened, or where they went,” he said.

Johnson and other survivors from the former residential school watched Six Nations Police (SNP) practice using ground penetrating radar at Chiefswood Park on October 20 to learn more about the process and to show their support.

Kimberly Murray, executive oversight lead of the Survivor Secretariat, who is leading the task force for the search said they chose the location because they didn’t think practicing on the grounds would be very respectful and they also didn’t want to draw a crowd of onlookers while the practice happened.

“We wanted to give the survivors and media the opportunity to come and see, ask questions and take pictures,” she said.

For survivor John Elliott the practice search location gave rise to memories from his time at the Mush Hole. He pointed across the river and said he lived in a house across from the park.

“I had so many numbers there. The first was 72 and the last was five because I ran away so much,” he said.

He would run away, stumble down the hill in Chiefswood Park and whistle for his mother, who was always waiting for him.

“I would go a lot, especially at Christmas because the ice would be over the river,” he said.

Six members of the SNP practiced using the machine, interpreting the data, formulating and expanding grids in a field near the Grand River.

Acting sergeant Gregory Hackson said officers had about four or five hours in class training and Wednesday was the first time the officers were able to use the machine.

“It went a lot better than I thought it would, for our first time,” he said.

Hackson said the machine itself was easy to move and weighed about the same as a lawnmower. The hard part of using the ground penetrating radar is analyzing the data and creating a proper grid.

“It’s a lot like a fish finder on a boat,” he said. “It doesn’t show you what’s down there, it just shows you that something is underground, like a rock or a pipe, or that the ground has been disturbed.”

Hackson says he’s not exactly excited to search the grounds because it’s a serious investigation, but he’s curious and wants to help further the investigation in whatever way he can.

“Both my great grandparents went there, so it’s somewhat personal, but its also, I really wanted to part of the investigation and assist in any way I can,” he said.

Survivor Dawn Hill says no matter what happens learning how to use the ground penetrating radar is a skill that will help officers and civilians in the future.

“I wanted to come watch and learn about the whole process,” she said. “It’ll be a helpful skill.”

There is no word on when the actual search of the grounds will start, as poo weather conditions have delayed training, but training will continue for both police and civilians later this month.

By Jessica Mundie THE ASSOCIATED PRESS Marlon Weekusk, a member of the Onion Lake Cree Nation…