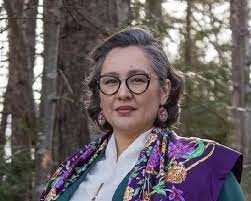 Observing during his first term that Legault sometimes didn’t seem to fully grasp the issues faced by Indigenous people, in her congratulatory letter Gull-Masty challenged him to connect his words about reconciliation with action. If he’s serious about working with and learning more about Indigenous peoples, she suggested having a high-profile Indigenous senior advisor in his office.

“When I saw him at the Pope’s visit with the Governor General, he was surprised we all knew each other and we’re our own group of people very familiar with one another,” Gull-Masty told the Nation.

“I think this is where he realized there are core issues that stretch across the Indigenous group.”

While she is encouraged that Legault’s new economy and energy transition committee includes the minister of Indigenous affairs and CEO of Hydro-Quebec, she was “caught off guard” by his campaign promise to study the potential of new hydroelectric dams. The comments immediately provoked strong rejections by Indigenous leaders throughout the province.

“When Legault made these comments, it wasn’t clear if he intended to develop new areas,” said the Grand Chief. “Having Hydro being part of that discussion is important because they know the actual capacity of Quebec. It will frame a proper discussion linked to the actual energy market, not a theoretical political discussion.”

The Cree Nation Government extensively studied the impacts of previous Hydro-Quebec installations in the region, from wildlife changes to the displacement of people and flooding of traplines.

Despite the economic benefits, even nation-to-nation agreements like the Paix des Braves have always faced strong opposition from many Crees.

While the James Bay and Northern Quebec Agreement brought the Cree financial and political power, it is important to remember what was lost along the way. The Cree Nation was forced to negotiate the historic 1975 agreement because La Grande River had already been dammed during delays in the legal appeal process.

“When I was first elected, I started assessing what we have sacrificed because of this agreement that we were essentially pushed into, because it was a court settlement, and where are we going in the future,” Gull-Masty said. “I’m still completing this analysis of the impact on the territory and the people that were there. What were they told and what are they now seeing almost 47 years later?”

Although she still questions whether the project’s impact was proportionate to what was received, Gull-Masty’s primary focus is determining where the Nation wants to go from here and what’s needed to get there. One year into her mandate, she considered the significant progress made on protections for culture, language and the environment.

“It’s been a busy year,” Gull-Masty remarked. “We’ve invested into ensuring those organizations with a culture mandate have a strategic direction. Language has been a huge issue, trying to support Jamie  Moses  in his new mandate as language commissioner.

We’ve probably had the biggest movement in environment.”

While the Grande Alliance with Quebec designated 20% of Eeyou Istchee as protected areas in 2020, Gull-Masty has begun discussing increasing this to the 30% identified during her time as Deputy Grand Chief. To address the moose population’s decline, particularly in Zone 17, the sports hunt has been closed and the Cree Trappers’

“I think everyone in Zone 17 has felt the strain of reduced activity and there’s a greater realization there has to be collaboration among traplines in managing hunting activity,”

asserted Gull-Masty. “Prioritizing moose habitat right now is extremely important. I want to emphasize my thanks to the people who have committed to the betterment of the moose population.”

Gull-Masty said that although not everyone has understood the purpose of these measures, most are following them diligently.

Waswanipi was the first community to publish a series of 13 guidelines, which limit harvests to two moose per trapline or one per family and require all harvests to be reported.

After social media rumours circulated about MFFP wildlife protection officers increasing surveillance and monitoring in certain areas, community members were informed these measures are to deter potential poaching activities and are not aimed towards Cree populations.

During the most recent CNG Council board meeting, other environmental matters were discussed such as last summer’s cleanup of abandoned mine sites. As Davey Bobbish prepares to assume Bill Namagoose’s former role as executive director in January, a key priority was organizing financial resources between various Cree entities and communities.

“The Cree prioritization agreement opens doors to provide easier access to work with the communities,” explained Gull-Masty. “This year we’re pushing forward an economic regional strategy and bringing in communities to the discussion. We’ve done well in the public sector, but we need to create that space for people to pursue their own entrepreneurship.”

Among the past year’s major events was the Pope’s visit, whose Cree interpreter was Pakesso Mukash. In early October, Mukash had the opportunity to meet Pope Francis in the Vatican, whom he presented with a tobacco pouch and asked to pray for Cree people so they may find peace and healing. Mukash said the Pope admired his traditional vest, smiled and responded, “I will.”

Gull-Masty said the Pope’s visit was an opportunity to collaborate with other Indigenous leaders. With coming negotiations on files ranging from **>residential<** school investigations to establishing communities for Washaw Sibi and MoCreebec, she believes building bridges with other nations will advance mutual goals.

“I’m grateful that dealing with the Pope file allowed me to meet many Indigenous leaders here in Quebec to develop working relationships,” said Gull-Masty. “It’s such a challenge moving forward for individual nations. I’ve always felt there’s a lot more drive to support one another and fight battles side by side instead of fighting each other.”

Patrick Quinn is a  Local Journalism Initiative Reporter with THE NATION. The LJI program is federally funded.

Awareness of white moose and its significance on the rise