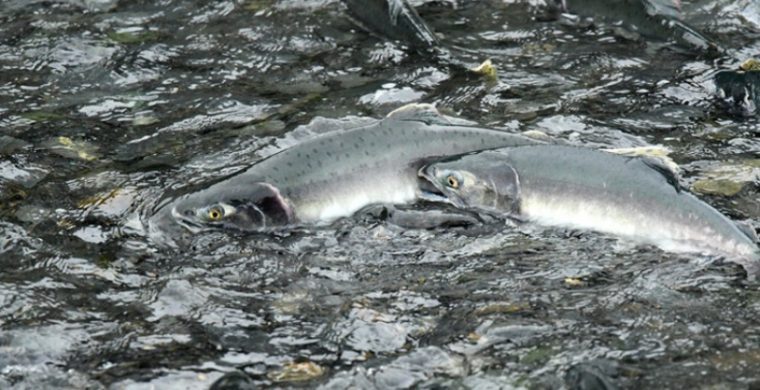 WILLIAMS LAKE, B.C. _ High on the Chilcotin plateau in British Columbia’s Interior, the chief of a local First Nation says the traditional diet of its members is threatened by a landslide more than 150 kilometre away.

Tl’etinqox Chief Joe Alphonse, who also represents five other local nations as tribal chairman of the Tsilhqot’in National Government, says Fraser River tributaries once teeming with salmon have shown paltry returns since the Big Bar landslide was discovered in June.

“On a good year, you can run across the river on the backs of sockeye, that’s how thick our rivers are. And bright, bright, bright almost fluorescent orange colour, it’s an awesome sight,” he said.

Alphonse estimated up to 170,000 sockeye returned to local tributaries this year where the annual average is closer to one million.

While the slide occurred in the traditional territory of the High Bar and Stswecem’c Xgat’tem First Nations, the Tsilhqot’in are among another 140 First Nations that the federal government has said could also feel the effects.

Members are concerned Ottawa isn’t doing enough to prevent further damage to stocks, and that the public may not realize there is still a crisis because salmon runs are finished for the season, he said.

The Department of Fisheries and Oceans says Ottawa and its partners in provincial and local First Nation governments are indeed treating it as a “conservation crisis” and restoring fish passage remains a top priority.

On Nov. 15, the Tsilhqot’in government sent a letter to the office of the fisheries minister requesting an update on the department’s progress, including monitoring and contingency plans should mitigation fail.

The letter asks for immediate updates when work barriers are encountered, in the interest of a “collective and transparent approach.”

Stocks already faced challenges of historic overfishing and habitat loss and the landslide could prove an extirpating blow, Alphonse said.

The possible loss of salmon, combined with a decline in moose populations because of the 2017 wildfires, means wild meats are scarce in region.

“A lot of our people live way under what the Canadian society would consider the poverty line, but a lot of our people are able to do that because they can still obtain a lot of their sustenance through hunting and fishing,” he said.

Fishing also plays an important cultural role in the community, and five months of the local calendar year are named for salmon or trout, Alphonse said.

The Tsilhqot’in aren’t alone in calling for more action.

On Monday, the Union of B.C. Indian Chiefs issued a media release on behalf of the First Nations Leadership Council asking the federal and provincial governments to declare a state of emergency, and for resources to be prioritized to remove the obstruction within the next 60 days.

It also asks the federal government to identify and fund a working group, including representatives from affected First Nations, to monitor the efforts and develop contingency plans in response to the crisis.

The Department of Fisheries and Oceans did not directly address the requests for a state of emergency or a contingency-plan working group in a statement Tuesday.

The Fraser River has not experienced a landslide of this scale for more than 100 years and the government says it has prompted a unique, trilateral response between the federal, provincial and First Nations governments. This includes the formation of a First Nations leadership panel, the statement says.

Responders also maintain a strong awareness of the slide’s impact, which could lead to the extinction of some salmon species, as well as the deep cultural significance of salmon to First Nations, it says.

“We are doing everything possible to address this barrier and to protect Pacific salmon stocks,” the department says.

Initial estimates show 75,000 cubic metres of material was deposited in the river and most of it is still there.

During a media briefing last week, the joint response team said water levels are beginning to drop on the river, presenting the only opportunity to remove enormous amounts of rock blocking salmon migration routes before spring and summer runs arrive.

But officials warned there’s a “high risk” they won’t be successful in rescuing the threatened salmon before the 2020 season.

On Tuesday, DFO said urgent winter work to clear the remaining barrier is well underway, as well as hydrological, geological and fisheries monitoring to inform future work and assess results.

“Contingency plans are being developed to ensure future fish passage if this is required. Our shared goal is to fully restore the sustainable, natural fish passage at the site of the Big Bar landslide.”

By Amy Smart in Vancouver.

This report by The Canadian Press was first published Dec. 10, 2019.

PEDESTRIAN STRUCK AND KILLED ON HIGHWAY 6 IN JARVIS