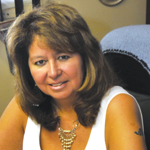 Lynda Is the owner of Turtle Island News Publications, a multimedia publishing company based on the Grand River Territory of the Six Nations, publishers of the international award winning weekly newspaper TURTLE ISLAND NEWS and several magazines and has recently entered the world of book publishing.

Lynda launched the weekly newspaper almost twenty-five years ago after recognizing a need in aboriginal communities for people to be informed of what was going on in their communities. She is one of the most experienced native journalists in Canada and has received many awards in mainstream journalism working for some of the largest newspapers and broadcasting companies in Canada.

Among her awards and recognition:

Lynda lives in her home community of Six Nations of the Grand River, just outside of Hamilton, Ontario with her three sons.