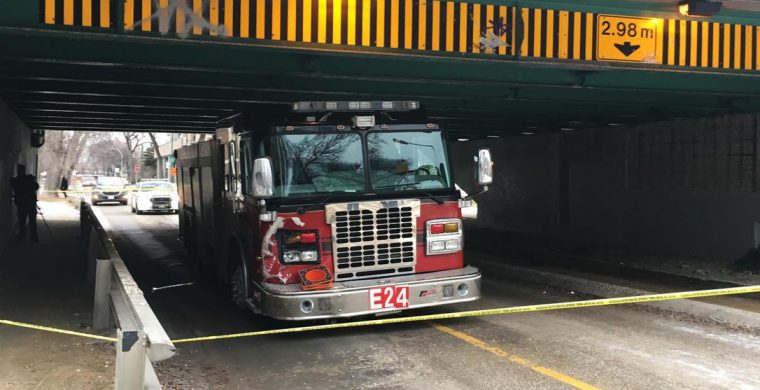 WINNIPEG _ Police zapped a man with a stun gun and took him into custody Friday after a suspect stole a fire truck and drove it, lights flashing and horn blaring, through downtown Winnipeg.

Const. Rob Carver said it appeared that the suspect was targeting pedestrians as police cruisers pursued the fire truck.

It rammed into another vehicle, knocked down a utility pole and drove onto the grass in Central Park, he said.

“It had run into a tree and through stop signs, and it was swerving, actively trying to hit everything he could on the way,”

Carver said, reading observations from police officers who took part in the pursuit.

The fire truck was parked after responding to a medical call when it was taken, said John Lane, chief of the Winnipeg Fire Paramedic Service. He didn’t explain protocols for locking vehicles, but did say they are typically left running.

“The danger that this presented was to everybody in the path of the truck and now to subsequent calls in that area because we don’t have the truck.”

Lane said fire trucks are extremely difficult to drive because, on top of their length, they carrying the weight of about 4,500 litres of water.

An off-duty firefighter reported the theft after he saw the long, red fire truck and noticed the man behind the wheel was dressed in civilian clothing.

The truck’s front corner was damaged and both front tires were deflated.

Carver said it was too early to know whether drugs were involved.

The city’s police chief has said a methamphetamine crisis is behind a recent surge in crime. There have been 41 homicides in 2019 _ matching the all-time annual high from 2011.

Two people were charged in October after a police car was stolen and city officer used spike belts to retrieve a cruiser stolen from the Manitoba First Nations Police Service in July.

“The threat was very real.”

This report by The Canadian Press was first published Nov. 29, 2019.

Dozens of cases of abuse by Catholic priests in Vancouver Archdiocese: report