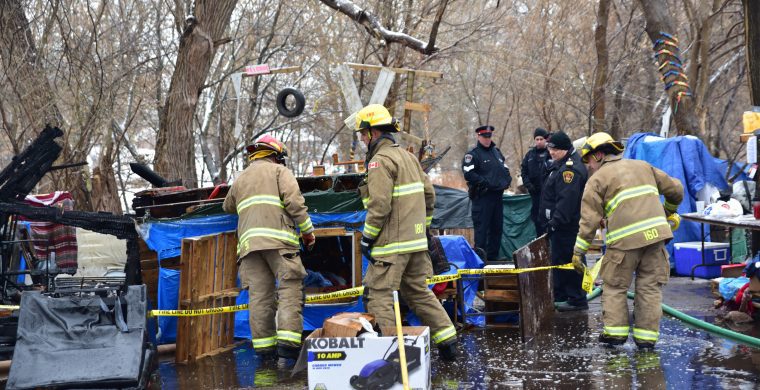 BRANTFORD-A six-month-old homeless camp just off Greenwich St. in Brantford is no more after police evicted residents from the site, which was subsequently set on fire in response. 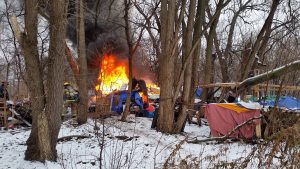 On Dec. 4 at 9 a.m., Brantford Police executed a trespassing order issued by the owner of the private property adjacent to the encampment and in response, one of the residents of the camp set a makeshift shed on fire.

“I lit my shack on fire,” Johnny, one of the camp’s residents, told the Turtle Island News, as police, fire crews, volunteers, and residents 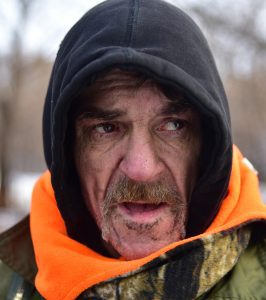 milled about in the aftermath of the fire. “I just wanted it to be recognized what the city was doing to us. We were doing fine, we weren’t hurting anybody. I have a home to go to. My friends don’t. And there’s nowhere for my friends to go. I’ll build them a home.”

A City of Brantford press release said the residents of Love Camp “were provided ample warning that the order would be executed this morning.”

The press release stated that the site was, “willfully set on fire, allegedly by one of the occupants. Fire officials responded to the scene immediately and the fire was contained swiftly. The City can confirm that there were 12 individuals occupying the site at the time of the incident and that there are no reports of any related injuries at this time. An investigation regarding the cause of the fire is underway by Branford Fire Department officials.”

At least half the residents of the homeless camp were of Indigenous ancestry and with the eviction and overflowing shelters throughout the city, the residents have no place to go.

Neighbouring Brant County Mayor David Bailey was on site last Friday morning after the fire was extinguished, along with Brant County Ward 2 Councillor Marc Laferriere. Nobody from the City of Brantford attended. 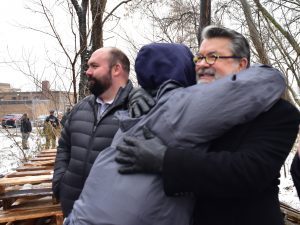 Bailey was in a meeting when he said he got a text the place was on fire. He wanted to help, he said, so he reached out to the mosque next door to the encampment to see if they could assist the displaced residents and provide them with lunch.

Laferriere, who is also a social worker, said, “This is par for the course when you don’t deal with affordable housing.”

Residents of the camp didn’t want anyone from the City of Brantford there, Bailey said.

So the two county officials decided to help out.

“We just want to see how we can help,” said Laferriere. “We’ll call our friends and neighbours and see what we can do in neighbourly solidarity.”

The camp was tucked away in a small wooded area across from the Brantford Casino. It was flooded from firefighters’ efforts to put out the blaze.

“They can’t go back even if they wanted to,” said Bailey. “I think this camp is over.”

The city opened a temporary shelter next door to the camp at the beginning of December but it’s only open from 8 p.m. to 8 a.m.

In the meantime, residents were busy picking through the camp and packing up their belongings shortly after the fire was put out, and many were left scrambling, wondering where they would go for the winter.

Some had been living there since June when the camp first sprang up.

Jessica Marsh, one of the camp’s residents, said she was going to set up another camp site.

“I’m pissed off,” she said. “I have nowhere to go. We weren’t hurting anybody.”

She said she refuses to go a shelter. She wouldn’t say why.

Brantford Police said they attended to “assist with keeping the peace” and are now investigating the fire as a criminal matter.

“Upon police arrival, a fire was seen encompassing part of the encampment and officers had to move quickly in order to rescue an individual before he was injured,” police said in a press release. “Brantford Fire was contacted, attended and quickly extinguished the fire. A criminal investigation is now being conducted into the fire and how it started. While officers were on scene, Emergency Medical Services needed to be contacted for a male who was found unresponsive in the encampment and who may have been suffering from hypothermia.”

Sarah Dover, who said she was visiting the camp as a neighbour and friend, said the residents have nowhere to go now.

“People have nowhere to go, no way to transport their belongings; they’re extremely 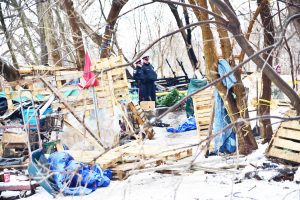 vulnerable,” she said. “The majority of them have disabilities.”

A man who didn’t want to use his name said he was a “self-appointed grandfather” of the camp. He has a home but visits the camp often.

He said the residents knew the day before that the eviction was coming.

“Some people split before the police got here. Some are still in the process of packing up their stuff. The most spectacular thing was the fire.”

He said the fire was started by a friend of his who he nicknamed “VietCong” who “made a statement” by setting one of the sheds on fire.

“It was started by the guy who built that house,” he said, pointing to the charred remains of a wooden shack. “He’s been the number one positive force down here for months. He takes people in his shelter; he makes sure they’re warm and dry. He’s been feeding them, looking out for them. He was determined to stay here all winter. In my opinion, he had every right to start the fire.”

Meanwhile, the homelessness crisis in Brantford continues, with at least one third of the city’s homeless population identified as Indigenous.

“The City of Brantford recognizes that homelessness is a complicated issue that demands a community response and to that end will diligently continue to work with community agencies, non-profit groups and our network of Emergency Shelter facilities to provide outreach services to those in need of support services and emergency shelter,” the city said in a statement.

In the meantime, the city is encouraging homeless people to attend the temporary emergency shelter on Greenwich Street right next door to the camp.
“The Temporary Winter Emergency Shelter at 180 Greenwich St. will accept individuals who come directly to the shelter during operating hours, however, the city’s social services support centre and the Salvation Army are the preferred points of entry to emergency shelter support services and will have the most current and accurate information on bed availability.”