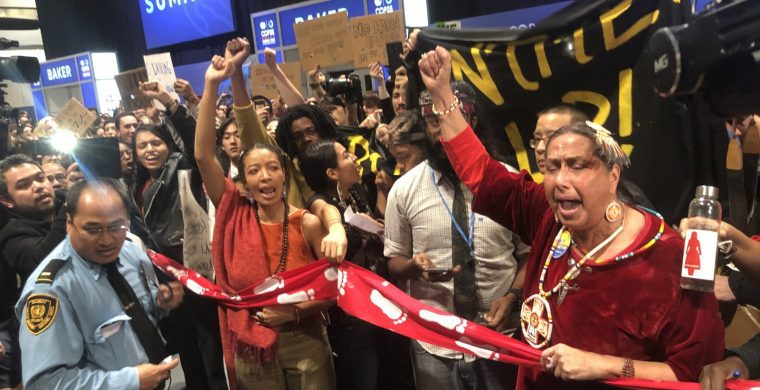 OTTAWA—Canada’s environment minister is raising concern with United Nations  after hearing that an Indigenous-led protest was shut down Wednesday by security at the global climate change conference in Madrid.

In a post on social media, Perry Bellegarde, National Chief of the Assembly of First Nations (AFN), said his organization is “aware that a group of Indigenous youth (including many from Canada) have arbitrarily been detained for a peaceful protest” at the conference.

An AFN official witnessed the protest and told the Toronto Star that security detained the demonstrators in a “courtyard” before removing their access badges. The official said the AFN is also not aware that any Canadians were arrested.

He told Turtle Island News there is “alot of youth here from Canada and the USA and New Zealand. The youth didn’t realize that you can’t demonstrate in the UN unless authorized.”  He said their badges were removed but returned later by security.

Chief Thompson is attending the conference for the Haudenosaunee Confederacy Chiefs Conference.

Sabrina Kim, press secretary to Canada’s environment minister, Jonathan Wilkinson wrote to the secretariat organizing the conference and “expressed concern” about security’s handling of a protest that — according to the Assembly of First Nations — included Canadian delegates to the climate summit.

Kim said the minister notified Global Affairs of the incident but is not aware of any Canadians that were arrested.

François-Philippe Champagne, Canada’s foreign affairs minister, posted on Twitter that “we are aware of this incident” and that the embassy in Madrid is “actively engaged.”

In her own post to social media, Green MP Elizabeth May — who is attending the conference with the Canadian delegation — said a “peaceful” demonstration for “climate action was pushed aside, with hundreds pulled from building. Youth I met after were still shaken.”