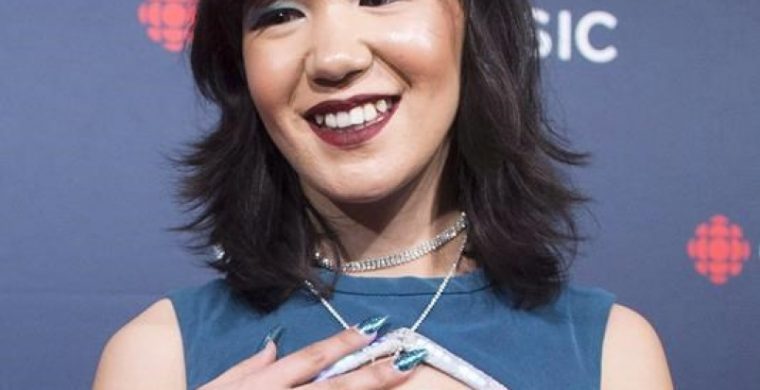 Kelly Fraser arrives on the red carpet at the Juno Awards in Vancouver, Sunday, March, 25, 2018. Inuk singer Fraser, whose popular YouTube cover of Rihanna helped inspire a Juno-nominated career of songwriting and activism, has died at 26. THE CANADIAN PRESS/Darryl Dyck

TORONTO- Inuk singer-songwriter Kelly Fraser rose to popularity on YouTube with her cover of Rihanna’s “Diamonds,” but those who knew her say the Juno-nominated musician’s dreams of global fame were equalled by her determination to inspire other Indigenous youth.

The independent pop musician, who lived in Winnipeg, died earlier this week at 26, according to friends. The cause of her death has not been released.

Fraser was an ardent supporter of the Indigenous music community, and took every opportunity to amplify the voices of other creators, said Thor Simonsen, a music producer who worked alongside her as a co-founder of Nunavut Hitmakerz.

Their travelling mentorship project, which launched in 2016, provides workshops in Inuktitut and free recording equipment to underfunded communities in different regions. Fraser played an instrumental role in its creation, Simonsen said.

“Kelly was a ball of energy and passion,” he said in a phone interview from Ottawa.

“She loved her people more than anything else and her entire being was centred around trying to improve living conditions for Inuit and First Nations. She was such a giving person.”

The singer, who was raised in Sanikiluaq, Nunavut, also carried her own musical ambitions, which took shape after she picked up a guitar at 11 and formed her first band four years later.

In high school, Fraser started translating English pop and rock songs into Inuktitut, picking the Runaway’s 1976 punk anthem “Cherry Bomb” as one of her first experiments. But it was her 2013 cover of Rihanna’s “Diamonds” that exposed her to many new listeners when it was shared widely among music fans and the Indigenous community on social media.

The video, which cobbled together footage of the singer, polar bears and the northern lights, has amassed more than 380,000 views.

Its popularity inspired Fraser to revisit other English hits in the Inuit language, including the Beatles’ “Let It Be” and Camila Cabello’s “Havana.”

“As a daughter to a residential school survivor I believe that keeping our language stronger will help my children, their children and so on,” Fraser told the CBC in an interview earlier this year.

“I want the young people to be inspired (so) that we can use our language however we want.”

It was Fraser’s sophomore album “Sedna” that garnered wider acclaim, earning her an Indigenous music album nod at the 2018 Juno Awards. She hoped the project, named after and inspired by the Inuit goddess of the sea, would inspire others who suffered from the lingering effects of residential schools and lost traditions.

Fraser’s approach to making Indigenous music stood in contrast to many of her contemporaries because it was firmly rooted at the crossroads of mainstream pop and Inuit influences. She cited Beyonce as one of her greatest inspirations.

Simonsen said the singer was ultimately “a pop girl at heart” who aspired to worldwide fame.

“She wanted to be on the charts next to Rihanna and the pop stars, but she was also very rooted in her culture,” he said.

“She had such a love of Inuit drum dancing, throat singing and traditional songs… She wanted to express the stories and share the struggles that Inuit go through, making it palatable for an international audience.”

After winning the Indspire Award in 2019 for her impact on the music community earlier this year, Fraser planned to start recording her third album “Decolonize” over the coming weeks in Toronto. The album was set to blend aspects of pop, hip-hop and rock music, and include several collaborations with other artists.

“She was the poster child of a young Inuk woman trying to rise above the challenges that are so commonplace in Nunavut and the Indigenous community,” Simonsen added.

A GoFundMe campaign to support her siblings was launched at:

This report by The Canadian Press was first published Dec. 27, 2019

Secrecy of police board hearing in Thunder Bay, Ont., must be reconsidered